Today I am excited to release FastScripts 3.0 to the general public. The app is available from the FastScripts home page, and is free to use with premium features disabled. Premium features can be unlocked for a one-time payment of $39.95 for new customers, or $19.95 for customers upgrading a paid license for FastScripts 2. Customers who purchased FastScripts 2 on or after January 1, 2021 are entitled to a free upgrade.

FastScripts 3 brings features big and small. The biggest changes have to do with improved script execution, search functionality for your script library, and tracking the progress of running scripts.

FastScripts 3 features a new app icon and a new menu bar icon. The app icon brings a fresh, modern look to the stylized “scroll and lightning bolt” image that has always represented the app, while the menu bar icon features a sleek monochrome design that looks right at home alongside Apple’s own icons.

Both icons were designed by Brad Ellis, who also designed the MarsEdit 4 icon. Thanks, Brad!

This update brings a fundamental change to the script execution infrastructure for the app, which will dramatically improve some workflows. Specifically, scripts are now run independently from the app and in their own application processes. This guarantees a consistent execution environment, and allows for an arbitrary number of scripts to run in parallel without impacting the performance of the app itself, or of other scripts being run.

The search field at the top of the FastScripts Script Menu can be used to quickly locate a script from your script library:

When the Script Menu is opened, the search field is made active by default, so any typing will immediately filter the menu contents to scripts that match your search. If the top result is the script you’re looking for, just press return to immediately run the script.

In tandem with the new support for parallel execution, FastScripts now supports the standard AppleScript progress updating mechanism. Scripts that report their progress will have timing and text feedback conveyed to users by way of the FastScripts menu: 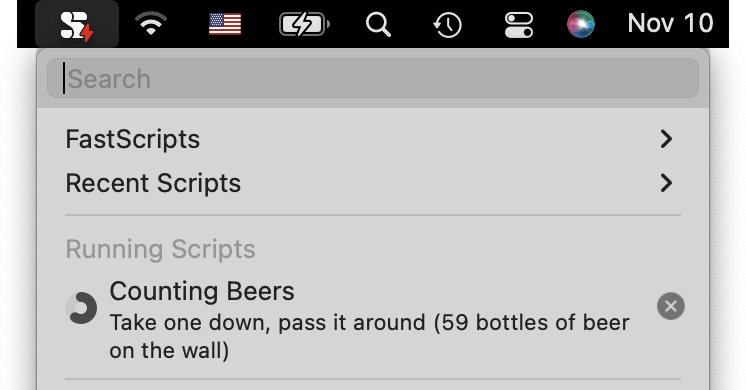 This interface also makes it easy to stop scripts if they have run amok, or you’ve decided you don’t want them to run to completion.

This update is the culmination of years of work on various aspects of the app, many of which are not “headline” level changes. Little things, like the ability of the app to detect when you attempt to assign a shortcut that is already being used for another script, to improvements to the appearance of the app’s built in “display message” panels, to the long-awaited support for symbolic links in the script folder, will perpetually surprise and delight you!

FastScripts is free to use with premium features disabled. The number and depth of premium features may grow over time, but as of FastScripts 3’s debut, these are the features that are considered premium, and a description of how they behave when used without a paid license:

That’s it! All of the other great features of FastScripts are completely free to use, so if you don’t miss any of the premium features, feel free to use and enjoy the app to your heart’s content!

Customers who purchased a license for FastScripts 2 can use their FastScripts 2 license code to unlock discount pricing at the Red Sweater Store. Just click “I’m upgrading from a previous version” after adding FastScripts 3 to your cart.

If you have installed FastScripts 3 on your Mac, open the “Enter Registration Code” panel, where your existing FastScripts 2 license should be acknowledged. If it is, clicking the “Open Web Store” button will automatically open the Red Sweater Store page with your upgrade license entered for you.

Upgrade from the Mac App Store

This update marks the departure of FastScripts from the Mac App Store. Apple’s restrictions on advanced functionality made it impossible to release a completely updated version of the app that Apple would allow in the store.

This entry was posted to FastScripts, Red Sweater News. Comments are closed. Thanks for reading!