Clarion 2.2.2 is now available on the Clarion site and has been submitted to the Mac App Store.

This update is a minor update primarily intended to fix an issue that prevented “Check for Updates” from working as expected in the previously published version. The update also fixes a crash that could occur while editing preferences.

If you enjoy Clarion, please consider writing a review or rating the app on the Mac App Store! Thanks for your support.

I’m excited to share that MarsEdit 5.0, a major upgrade to our beloved Mac blogging application, is now available on the MarsEdit site and has been submitted for review on the Mac App Store.

An update to the Setapp version of MarsEdit will be coming soon.

MarsEdit 5 features a beautiful new icon, a “Microposting” feature for streamlined short-form blogging, enhanced plain-text editing with built-in Markdown syntax highlighting, a completely rebuilt rich text editor based on Apple’s latest WebKit2 technologies, and a variety of nuanced improvements to make your blogging workflow smoother, and more enjoyable than ever.

First, I’d like to thank my friend Brad Ellis for revising the MarsEdit icon again to fit the modern “rounded rectangle” style of icons that Apple recommends on macOS. I love the relatively flatter look and the stencil-like style of rocket and flame outlines:

When I heard Nilay Patel of The Verge on The Talk Show a few months ago, I was struck by something he said about the recent redesign of The Verge. He said something along the lines that a goal was to make it “as easy for writers at The Verge to publish short pieces as it would be to post them to Twitter.

This got me thinking about MarsEdit’s role as a blogger’s best friend. For years I have heard repeatedly that the number-one reason people prefer writing to their blog with MarsEdit is that it “reduces friction.” It struck me that seizing on the opportunity to make writing to your blog “as easy as posting to Twitter” was a perfect opportunity to continue doing that. Now, when you’re at your Mac and a whimsical thought comes to mind, you can press a system-wide shortcut to bring up this MarsEdit panel: 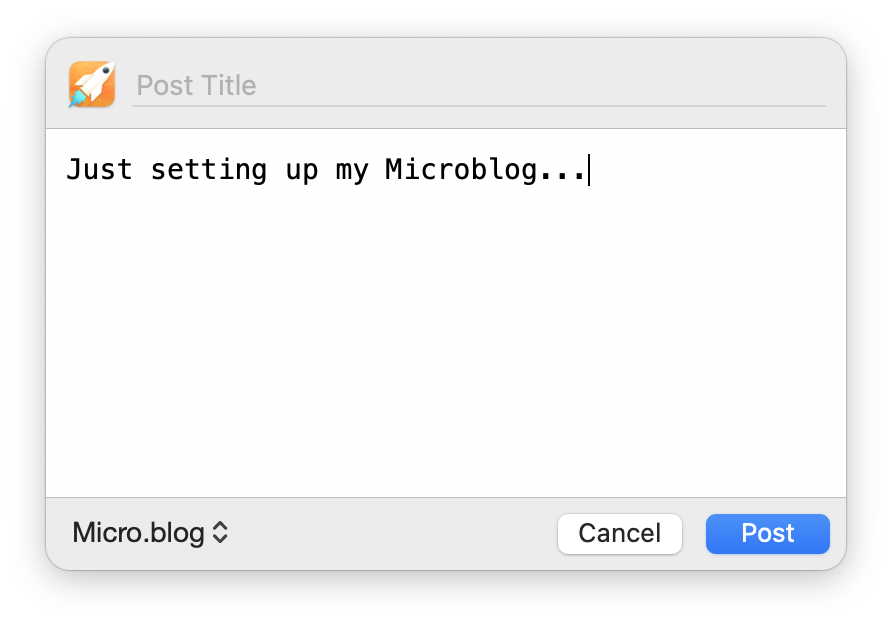 Just type your message, optionally add a title, and press the “Post” button. MarsEdit will shuttle it off to your blog, and you can get back to whatever it was you were doing.

Stay tuned for more enhancements to the Micropost panel. Top of the list is supporting image/photo attachments!

For years, MarsEdit has featured two distinct modes: plain text and rich text. In plain text mode, users have the option to write in literally plain text, that is, with no formatting all, or to write using HTML tags, or to write with whatever plain-text notation their blog happens to support.

Increasingly, blogs support John Gruber’s Markdown, or some variation on it. It has always been possible to write Markdown text in MarsEdit, and to have it either sent verbatim to your blog as Markdown, or to have it converted to HTML automatically. But until now, the plain Markdown text has been unstyled. MarsEdit 5 changes that with a beautiful new styling that automatically detects Markdown in plain text mode, and transforms it visually: 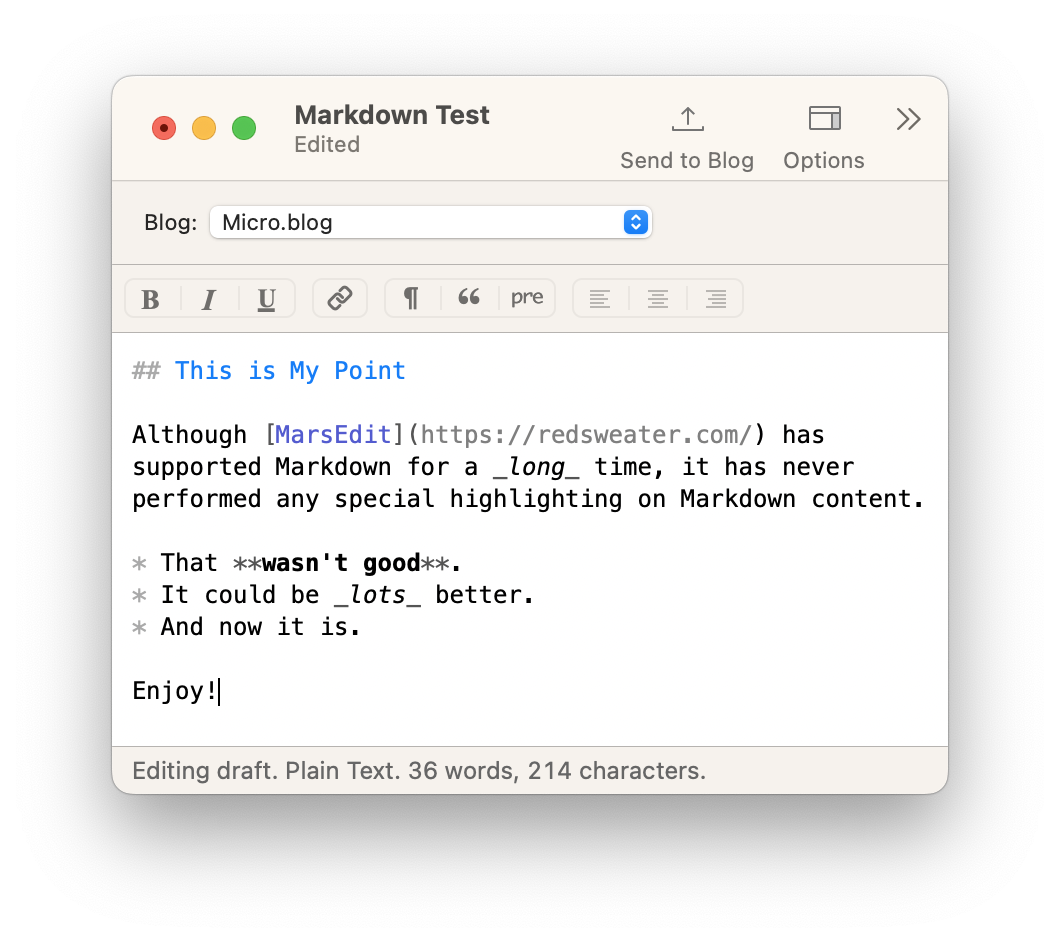 If you’re excited about using Markdown in MarsEdit, but haven’t used it before, there are still some caveats to be aware of. I recommend reviewing this post about how to best approach making sure your Markdown is treated the way you expect by the app, and by your blog.

MarsEdit’s rich text editor is built on Apple’s WebKit technologies. When you write in rich text mode, you are literally constructing an HTML rendition of your post directly in the app. This has been an amazing feature for users who are not inclined to use one of the plain text options MarsEdit supports, but owing to the long history of MarsEdit, the particular WebKit technologies it used were becoming less and less supported by Apple.

In MarsEdit 5, I’ve taken the leap to Apple’s so-called “WebKit2” technologies, which introduce huge architectural changes at the programming and development level, but which shouldn’t change much about the way you interact with and enjoy the rich editor.

There are some side-effects that you might benefit from. To the extent Apple continues to invest in the performance and correctness of WebKit, those benefits will accrue primarily to modern apps like MarsEdit that have embraced the latest and greatest.

Another great benefit for both users and myself, is that in the event something causes WebKit to crash, it will now only crash the particular editor view that exhibits the problem. The modern approach to WebKit uses multiple processes to contain the behavior of each web editor so that it can’t impact the rest of the app.

Hopefully you’ll notice other little improvements as you settle in to the app. I mentioned Markdown highlighting before, but HTML highlighting has also been improved, and for example will now show potential errors in your HTML code as you type. There’s a new inline Search & Replace functionality that replaces the old-fashioned feeling Search Panel from MarsEdit 4. If you set publishing dates manually on your post, either to back-date something or to schedule it for future publication, you’ll enjoy the new calendar style interface to doing so: 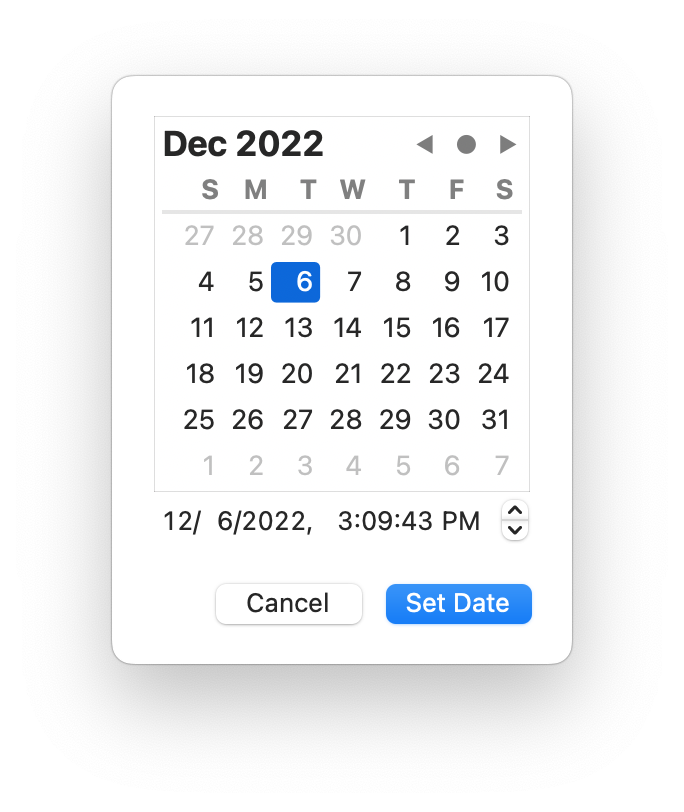 That’s All for Now

Well, that’s not quite everything, but it’s almost everything! Please download the upgrade and try it out for free for 14 days. Hopefully you’ll find the changes I’ve described above, as well as a few other lurking surprises, as satisfying as I do.

If you enjoy MarsEdit, please consider writing a review or rating the app on the Mac App Store, spreading the word on Facebook or Twitter, and of course, writing about the app on your own blog! Thanks for your support.

I’m excited to share that MarsEdit 5, the next major upgrade to the desktop Mac blog editing app, will be officially released in about two weeks! I am still tying up some loose ends but I want to share an early peek with any users who want to give some of the new features a look:

This update includes a number of changes, both big and small. When the public release is complete I’ll write a more thorough description, but in the mean time here’s a bullet list of some of the biggest changes:

There may be a few surprises in store yet before the official release, but I hope you enjoy checking out what’s there now in the mean time.

MarsEdit 5 will be a paid upgrade for existing licensed users of MarsEdit 4, and a free upgrade for people who purchased MarsEdit 4 after July 1, 2022. So if you’re excited about what you see and want to ensure you get MarsEdit 5 for the lowest price, purchase MarsEdit 4 today!

This update improves performance when invoking scripts that use AppleScriptObjC to import functionality from Foundation or AppKit. Several advanced FastScripts users reported issues after upgrading from FastScripts 2 to FastScripts 3, that such scripts had degraded in performance. It turned out to be rooted in the fact that FastScripts 3 initializes a whole new script runner for each script invocation, and the cost of initializing Foundation and AppKit when the script runs caused a slight delay. With this update, each script runner is pre-initialized with such support to avoid the delay when a script runs.

If you enjoy FastScripts, please consider spreading the word on Facebook or Twitter! Thanks for your support.